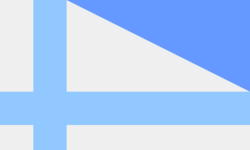 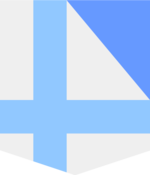 Patiencia, primarily known as Port Town Patience is a small peaceful town set near the sea acting as the satellite town of Harmonia found in the east. Patiencia is home to Crescentalia's main headquarters for the Furria Guild and is home to select Antecedents.

Travelling straight from the ports of Patience towards the sea leads to one of the Crescentalia Path Reflectors. Exiting the town will lead to the Maui Fields. 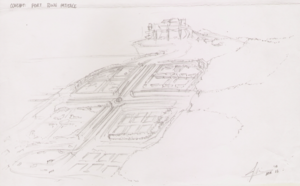 A draft concept sketch of Patiencia

The calm port of Patiencia founded upon the mainland south of the Northern Path Reflector of Crescentalia. Its plus-signed land structure of stone, wood and water makes it a center of easy access to most services for a small town.

Even as a peaceful town, Patiencia is known for its week-long recreational celebrations found every two months, it's relaxing facilities and being a contribution to trade around the seas in and between the harmonial kingdom.

The port town has made home to select antecedents, most of which are friends in-between before their antecedence.

The blue cross represents the town's river, being the central point and the founding theme of the town, expanding into its current state. With the blue beyond showing opportunity and peace among the view of the sea, giving a sign of peace coming covering what's more to come. The white is used to represent its cleanliness kept along with the town.

Patiencia is one of the unique towns which are led by no one but its major contributors and their people in pacts, achieving a natural harmony in trade, to the point it was a possibility that it was the reason that recreational celebrations are being held.

The Furrian Guild inhabits most of the services as most of its inhabitants are volunteers, bearing a mixed bag of Paticials ready to take on bizarre aid.

Patiencia is sought of its inhabitants as a place of respite, peace, simplicity and calmness with its conflicts and complexities being a contribution as a spice of life in an otherwise near-perfect representation of plain conflictless outcomes. Though being managed by their own, its hidden rules in place are simply suggestions for the people, allowing in their own freedom.

Being a minor town, protection was not as intense as other towns. But to reassure security, a “Spirit Guardian” is assigned to ward off the town from danger, in addition to the security and guidance of the Furrian Guild. Without the protection of the spirit guardian, the town can quickly get overwhelmed with monsters due to its pure energy. Patiencia is a cross-shaped small port town glazed with tiles for flooring, and brick-wood hybrid houses filled lush flora on the sides. The houses along the cross have two stories and can be crossed along with bridges. These can serve as a double-decked house or a single decked house due to its nature of using Arcspaces.

In the middle of these streets lies a large river waterway for use of traversing through the water and quick access using small boats. The water is also constantly filtered and kept clean and has a dual-purpose to go across to the other side of the river and giving access to its underground space and vice-versa by swimming directly through them in addition to elevators and stairs.

The east of the town center leads to a mountainous area and to the west lies the outskirts, which is surrounded by forests and farmland. Heading north from the town center is the port going out the sea.

Patiencia is home to unique landmarks only found in the town, this includes:

Started as a far departure for a band of Typyl settling near the beach, Patiencia was originally a very small Port Village free of rule, agreed to be dictated by a coalition several groups working together to function as one town with each group of the coalition being one part of the town.

It quickly became the center of trade, functioning as a satellite town to Harmonia and having easy access to goods from other continents due to the town being near a Path Reflector.

After the Saviand Anomaly, the coalition with the help of Harmonia has decided to make Patiencia a center for antecedents, allowing to accommodate as much space for antecedents as possible to prepare for the Antecedent Event. This, later on, quickly amassed by the antecedents quickly being reserved out of nowhere a system has been made in place so that each antecedent where Patiencia is their home being properly taken into account.

Patiencia was later on recognized to be the headquarters for Crescentalia due to Kaiera L'Heart's influence on the town, Crescentalia, and the guild as a whole.