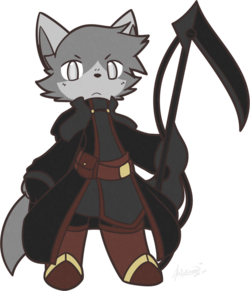 Eli “Six” Avid is a recurring character in Furria. He is a member of the Furria Guild, working on quests at his hometown of Port Town Patience.

Six is a representative of the people that undergo antecedence, representing the user last6x. Six is also the 6th of the original 12.

A member of Patiencia's Furria Guild who is known for being the “Grim Judge”, a powerful member of the guild who is seen as the one who judges who lives and who dies in situations where it is grim. As such, he does take black tasks of the guild, mostly in resolving conflict either himself or otherwise.

He is also serves as an actual judge in some cases when a conflict needs to be resolved between two parties, giving fair judgement in both sides.

Outside of work, however, he is actually a good pal to hang out with.

Before transitioning through antecedence, he was an aspiring guitarist early on before taking on law. He started out aligned with light at first but ultimately sided with darkness as he aged, and is further improvised with the concept of law, acting upon judgement of right or wrong. He takes on this idea further when going to Furria.

He is very proficient with dispatching foes using his guitar-scythe, weakening his enemies with disruptive sorcia-bound sounds using the scythe before attacking them with swift swings and spins of the scythe. The blade of the scythe itself can be adjusted down to form a one-sided blade, allowing it to be use for defense and for hacking through enemies without requiring a spin.

Though as chaotic as it could be as a battle style, the guitar-scythe itself could also act as a normal guitar, showing his capabilities of him using it.

Alison Avid is Six's sibling and the 7th of the original 12, next to Six. He finds himself tagging along with Alison in tasks and hanging out in general and vice versa. Since they hang out together so much from time to time even with his or their friends, they also find themselves cooperating and tagging a lot in battles, complementing Six's close-range combat with Alison's long-range.

They could sometimes be found together at night celebrating or just having a good time in the Cape District of Patiencia.

In addition to Alison, Six is one of the Typyl who are part of the Original 12 members before the concept of Furria was concieved. Not all of them he is friends with himself.

This page is approved as the current official version only if this page is placed found outside of the ttropes namespace.
You can visit the up to date and modified original page at oc:last6x:six_avid.