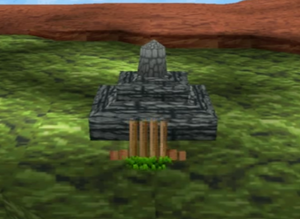 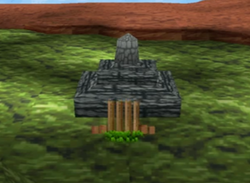 These path reflectors were once made by ancient technology but developments for temporary locations for Path Reflectors has been in development with the Typyl, however these tend to be very expensive to be built. It is not known how they are properly made as knowledge of these are lost in time.

Path Reflectors are large structures made out of either crystal, metal or stone that holds a structural core in the center deep in the ground primarily used to provide energy for travel. Entering the structure usually presents a port, a gate, a hallway and a transport room.

The transport room itself is an octagonal room, showing all of the available choices for which area they can travel to. Most path reflectors do not have access to every continent and/or moon. The area underground is a series of puzzle rooms going all the way to the core to protect it, and the core's room withholding a guardian entity underneath.

Path Reflectors are usually small, and contain only one transport room fit for a party of 10. However, there are larger ones with a larger port and several transport rooms fit for multi-continent and mass travel to different locations. Large Path Reflectors do have personnel managing it, so these tend to have a fee for travel in order to maintain it.

These can be found in multiple locations in several continents, usually very far from each other.

Traveling to a specified continent is simply done by activating the corresponding continent's sigil on the wall and stepping on the transport circle found at the center of the room. However, the nature is different for traveling from moon to moon or from Fiagia to a moon and vice versa.

The time it takes from traveling to one location to the next is purely dependent on the amount of satellites it takes to cross, usually taking a minute to cross one satellite. Anything that is inside the path reflector is surrounded by a cylinder of light hovering in air as they travel, but a magic round platform will always be available for them to stand on.

Over time, unattended Path Reflectors may shut down to conserve energy automatically, turn off certain locations due to a lack of energy or get broken down due to a fault. The maintenance of these Path Reflectors has proven to be tricky due to their puzzling nature underground, with the addition of the reflector guardians being hostile to any of those who enter the core's chambers unless it's from their own owner or those who are trusted to manage the path reflector. These path reflectors recharge their energy if they are not broken down and are not in constant use.

Moon travel requires for a moon to be in range to a network of path reflectors in Fiagia since they are usually positioned too far from it, which makes their availability all dependent on where they are positioned from Fiagia.

Traveling from moon to moon is impossible unless the two moons are nearby each other. Instead, they must travel to Fiagia first to a series of Path Reflectors until it is in range of the moon they want to travel to and head there. A tool for satellite observation is also found inside the path reflector if they have access to the moon, to check which and what chain of Path Reflectors they can travel to in order to reach them.

Though Path Reflectors are used for transport, Path Reflectors also serve as towers for use in tele-communications, providing a network for those who use it to interconnect between systems all over Fiagia and its moons.