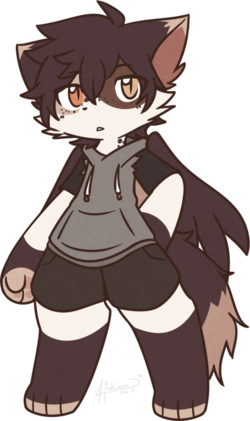 Robin is a written character in Furria. Robin is a simple yet highly unstable villager in the Port Town Patience.

Robin has gone through antecedence and represents the user lokatts.

Robin is an common villager in Patiencia who comes off as cold when interacted with but commonly hangs out with friends around the area.

He needs to be constantly taken care of due to him being weak physically. Due to this he cannot always enter Downstate whenever he is taken to missions in the Furria Guild as he cannot recover easily after revival but is a powerful asset in battle due to his skill.

Outside, Robin tends to come off as cold but is actually friendly at heart upon knowing him. Despite this, he suffers from severe anxiety and depression when left unattended and he doesn't like being alone due to his abandonment issues from his past.

Robin also suffers from a lack of sleep due to consistent nightmares. His eyes are noticeably baggy due to this.

Before human transferrence, Robin was a weak-bodied digital artist bound to a wheelchair. His condition has made him weaker and weaker over time, having a hard time to interact with things around him until succumbing to death. Being in Fiagia was a godsend to him as he finds himself in a better condition than his previous life, along with the change in physique.

In battle, his body is frail and easy taken out by powerful attacks. With this kept in mind, he can quickly get in and out of battle whenever he is in trouble and defend fairly well through dodging, especially using his wings.

In general, he cannot always battle by himself unless taking on an enemy alone that is not more powerful than him and must be protected at all costs as he is a good asset on dealing damage.

This page is approved as the current official version only if this page is placed found outside of the ttropes namespace.
You can visit the up to date and modified original page at oc:ttropes:lokatts.