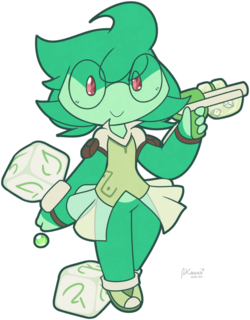 Eryb Yvan is one of the resprentative Sav who represents the aspect :alea: Alea.

Eryb saved her fellow children of the town by almost giving up her whole life to her captors through serveral gambles & challenges.

For more information with Eryb as a Sav, check out her wiki/sav page. 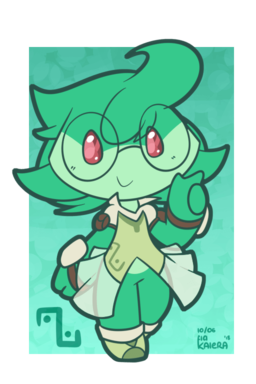 Quirky yet calm, Eryb is no gambler even though her posture and nature dictates that. She always tries a game of chance, she usually and carefully tries to make her disadvantages less severe. She also makes sure that she pays attention on what each result is.

Eryb is known to do lucky breaks, but in reality she adjusting things in her favor. As such, she always prefers to choose anything that gives her slight benefits than major risks.

Outside of gambling, she's a cautious person but friendly and quirky in nature. She may look wild, but she can be trusted.

Like her aspect, her aspectal dice and aspectal dice gun plays around with chance, however both of them are not disadvantages to her as she knows how to improvise with them unless something else goes awry.

Aspectal Dice are simple dice in nature that each face has a different value. Instead of numbers on each side of the dice, it will be one of any elemental base or fusion aspect. Eryb can use it to set up before or after the value is shown. Each side can be customized before any battle beforehand.

Eryb can set this dice in either of the following forms: a pillar, a flat circular wave, a trap or explode.

She has a pair of these at all times in battle and will be hovering around her unless rolled. Once the set has been triggered or after a while, it goes back to Eryb.

Like aspect dice, each side represents an aspect, however it functions differently. The effects of each dice are different on each side and each die found inside the gun can have their effects combined with another.

The dice inside the gun can be set in the following forms: a beam, a following projectile, a bullet or explode.

The amount of aspect dice in her gun is the same as the ones she has outside, only being a pair of dice. It doesn't set down like the dice outside, but instead it's placed on the top canisters so it cannot be removed.

This page is approved as the current official version only if this page is placed found outside of the sav namespace.
You can visit the up to date and modified original page at oc:sav:eryb_yvan.