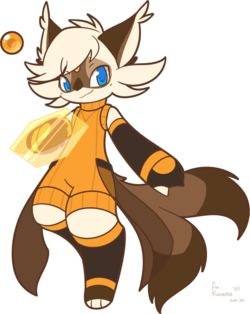 Chris Filvazt is a magic tank who is a part of the Furria Guild in Port Town Patience. He is highly known for playing the violin in the town and for his unique weapon, the Aegis P.

Chris Filvazt is one of the humans that went through antecedence representing the user chris_filvazt.

Chris is a mercenary that has chosen to live in Port Town Patience. He is also a magic tank who doesn't hesitate to help people if they need his power.

He is also known as the “Wild Violin”, loving to play in the towns main place with people to hear his music.

Being the Bearer of the Aegis P, Chris does his best to train himself to use his unique weapon that is a part of him. While using it, his hands and arms have blue light trait covering them, and his eyes are also glowing. He mainly uses it as a shield to protect a maximum of 8 people, him included. During the time he is using Aegis, Chris’s MP and HP recovery are multiplied by 5.

Chris is someone that often listens too much to his feelings before he thinks. He is mostly kindhearted and will help as much as he can with people, outside of dark money stories.

But in a fight he is like another person, often called the “Shield Stratagem”. He becomes cold and calculates everything he can.

Chris first studied in the class campus of Geo, learning different classes that would suit his “magical tank” style, sorcia related to :lucerna: Lucerna and the class Vibril. Being a hard worker by nature, he was often finds himself lacking sleep and commonly found asleep inside the library.

During his classes, one of his instructors noticed him using his own unique weapon: the Aegis P and decided to help him master the defensive weapon. Later on, they became good friends and stayed in contact once Chris has finished learning his classes.

Later on, Chris becomes an independent mercenary at the service of Patiencia. He encounters Shadic Electrois, later becoming one of his best friends. Since then he tries his best to get on the same missions with him.

He joins the Furria Guild in Patiencia to serve the town as best as he can, often found playing the violin in key places on Patiencia.

This character hails from a more alternative Earth, but still the same author.
Chris, known as Chris Marchand, is one of the few people that have been “chosen” to be a new generation of living weapons.

During the 4th World War, a project called “Sword and Shield of humanity”. (SSH) Chris was in the Shield part of the SSH, being called the Aegis P (Aegis Protector) for being a living energy shield. Searchers fuse in his own soul a sort of crystal that fuses with it, leaving the human able to make an energy barrier as big as what antecedents call New York City.

Sadly the madness of that war made them want to try to protect a whole country, and only Chris’s Aegis could possibly do that… Even if the success chance was only 1%. Chris got all his energy and life energy drained to make a shield that lasted… 10 min. Chris’s body completely disappeared along with the Aegis P.

His weapon of choice, the Aegis P, has morphed into a

Reflector during the transition to fit Furria's world and is attached as to him as an augmental attached in his arcitory. However, it's power weakens to the transition as well, making Chris improve the Aegis P over time.

Chris is essentially an Absorber, a Magic Tank. He won’t hesitate to throw himself in front of spells or cover someone when magic attacks come. In addition to his skills as a tank, he uses a variety of sorcia related to :lucerna: Lucerna.

Outside of fighting, Chris is a violin player. He fell in love with the instrument and often gave concerts in the streets of Patiencia.

The Aegis Protector (shortened to Aegis P) is a

shard that's technically infused to Chris as an augmental, producing a wall of hard light hexagons made with :lucerna: Lucerna in front of him or any target he chooses to protect from spells.

The hexagons themselves do not fully block attacks, instead will absorb the energy received from the attack as much as possible, and then send it back as an attack in the direction Chris wishes. He is also able to physically manipulate the hexagons themselves and move them around, in addition to using whatever he can with Lucerna for Sorcia.

The Aegis P itself is not without limits:

The Aegis P was first a shard infused to Chris. Ever since Chris' transition to Fiagia, this has turned into a reflector, fully repairable, modifiable and removable when not needed. However, it only works for Chris and Chris alone and can be used as long as it is present in his arcitory.

Chris met Shadic Electrois met during a mission and easily got along.

Being shorter than Shadic, he is often called “Kitten” by Shadic, but accepts it from him. Shadic helped him to open himself to others and to control himself a lot better about his own feelings.

This page is approved as the current official version only if this page is placed found outside of the chris_filvazt namespace.
You can visit the up to date and modified original page at oc:chris_filvazt:chris_filvazt.