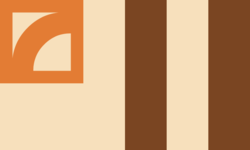 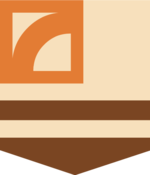 Naiea, known as Clear Swamp Naiea is a swampland village found in the forest-heavy marshes of Quailyn. Naiea started as a lesser-known village until the inception of the Sav Heilao, to which the town is known for and continues to strive due to it's beautiful scenery of the recovering town.

The earthy colors of the flag represents the freedom from the recent nightmare of events that plagued the village and the sunlight they see from the first time in years, signifying that they can finally relax from the frantic history of Naiea and its corrupted surroundings.

The arc resembles the rising sun, complimenting the warm colors of sunlight and the two brown lines being the two pillars, which is the foundation that the village is set upon.

Naiea consists of a council of trusted members, surrounding over a leading headman who oversees the whole village. The role of headman is passed on from generation to generation, which the most capable being next in line.

Clear Swamp Naiea is a small swampland village that is surrounded by marshland. The village itself is made out of wooden materials and its variants and is entirely supported by two pillars from two ends of the village. The village itself is stood on water, it has no way of getting in and out except for using transportation on water or via teleportation.

The marshland itself is almost clear and is used for farming different resources where water is shallow near the village.

Naiea is home to a select few homeless people due to the isolation of their surroundings. These serve as a home for orphans, taking care of them until they are adopted or have fully grown to live by their own.

This is also the home of Heilao before he became Sav. It is also where the village's only porter is located.