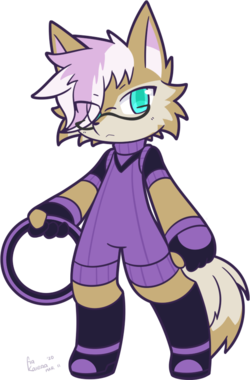 “Why bother wasting my precious break interviewing me just to get a quote?”
—Zainola Kiyasun

Zainola Kiyasun is is the head librarian in Patiencia Library, providing knowledge and tips on Sorcia combinations for residents and travelers.

Zainola Kiyasun is one of the humans that went through antecedency representing the user A.Y.

Zainola Kiyasun is the head librarian of one of Patiencia’s libraries, he got into this position for his hardworking personality and his strong appetite for knowledge and truth.

His co-workers all admire him as both a faithful companion and an experienced Sorcia user.

Despite being an earnest person towards work-related conclusions, he is very serious about healthy resting and holidays, since he had experienced unforgettable sleeping issues that resulted in him to be both mentally and physically ill for a short period of time.

In his spare time, he likes to take on classes related to advanced Sorcia skills, and discover new combinations of attacks and twists afterward. He also really enjoys long walks along the shore, he explains it as “The sea reminds him of his gratefulness for freedom.”

You can usually find him in the library working, or roaming around the night market after work to buy supplies and meet with his sibling, Kokae Kiyasun, who works there as a well-known chef in his food stand.

He has a weird mark on the center of his chest and stomach which looks like an X-cross. Thus, people call him “Professor X” because of his mark and his powerful wisdom and Sorcia skills, despite him not being a professor in any genre.

Despite being an antecedent, his entry in every antecedent's compact contact list was not registered until recently. The reason for this happening is still unknown to this day.

He is sharp and apprehensive towards outsiders, but once people started bonding with him step by step they will realize that he is actually a caring and generous person, who is willing to help others with various subjects in a wide variety. People used to refer him as an “Antecedent Enigma”, since back then the compacts didn't register his name yet, which remained an unexplained mystery to this day.

He is the type of person who puts the requests of friends and family as top-priority and would do his absolute best to complete his work errands as soon as possible if one of his close-ones needs him for aid.

He doesn’t feel comfortable in vociferous and crowded places. Thus, he lives alone in a cottage found in the Cliffside district of Patiencia. But, he also enjoys going on a shopping spree at popular retail locations such as the night market from time to time to release the stress of work. (despite really enjoying his job)

As a peaceful person, he usually tries to evade any needless combat. But if he needs to use violence, he would go all out and mercilessly take the opponent down with complex yet critical Sorcia combination spells, thanks to his studies, but that is most unlikely to happen in normal cases. He would resist himself from going furious as hard as he could.

One day, a local farmer found Zainola unconsciously lying on the in the forest rubbles after an unknown quake nearby, and was taken to the local hospital. After waking up, Zainola found out that he had lost almost all of his past memories.

The Furria Guild provided him a cottage to settle in, and soon he found a full-time job at a library in the center of town. From there, he started his new life there as a fulltime librarian. With his enthusiastic working spirit and excellent performance, he was soon promoted to head librarian and respected by locals and other librarians.

Because of his rare case of amnesia, he refused to socialize with other Antecedents and prefers to be alone, for he is unfamiliar with any present Antecedents at the time and feels rather unnecessary to get in touch with strangers.

He has been struggling with lost memories and self-identity for a long time. He would have horrible nightmares vexing him almost every night, resulting in him to ask for professional aid from a psychologist in a local clinic.

Later, a “particular event” triggered his memories to flow back, and this drastically changed his behavior towards other typyl, his discoveries of his hidden skills, and in general, made him a more festive person. (for details, see “Empty”)

This character hails from a more alternative Earth, but still the same author.
Before partaking in antecedence, Zainola was a diligent but rebellious student in a small village, which may look peaceful and quiet, but never judge a book by it’s cover…

Zainola mainly focuses on sorcia-centric attacks, but he also carries melee weapons with him just in case. He uses his rapier when he doesn’t feel the need to cast spells.

He also has a signature weapon, the dreamcatcher blades. It’s a custom-made weapon made from the very dreamcatcher that stayed with Zai ever since he arrived in Furria.

In combat, he would take a brief moment to calculate and analyze the foe's movement and attacks thanks to his studies, past experiences, and his trusty book of spells. After that, he would find the swiftest way to end the battle by using the most suitable spells or attacks. He would try his best to use a peaceful way to end it, lowering the general harm to a minimum but also effectively beating the foe.

With the three aspects(:inane: Inane, :vello: Vello, and :aporia: Aporia) combined, the user will be able to create a medium-sized “black hole”-like substance at the desired location, dragging its surroundings inside. Meanwhile, holding on allies using :vello: Vello to prevent them from getting devoured. If a foe is dragged in, there are usually 1 of 3 circumstances that would happen to the victim.

If the stated circumstances didn’t occur, then the spells will just deal normal damage to their opponent.

However, this spell takes a lot of energy and concentration, there is a great chance that the user would be unable to use sorcia for a decent amount of time due to exhaustion. Plus, the black hole itself is very dangerous by its self, even without the extra syndromes, thus, Zainola barely uses this skill unless is it really necessary.

Close brothers since their past lives. After their unexpected reunion in Furria, Zai started to hang out a lot with his older brother in his free time. Zai usually visits him every weekend at the night market where Kokae worked as a stand owner, his food recipes are the exact same from their past lives’ so having a familiar meal once a week really brings the nostalgic feeling to him.

Usually, Zai is the type who doesn’t go home until work is completed, but he would ignore his work just to bond with him. And his brother would do just the same for him.

Zainola’s usual psychiatrist that assisted him from curing his amnesia. A very talented and energetic girl. After regaining his memories back, Zai still frequently returns to the clinic to see how she’s doing and enjoys a little chat with her. After some time, they developed feelings for each other, and are currently seeing each other.