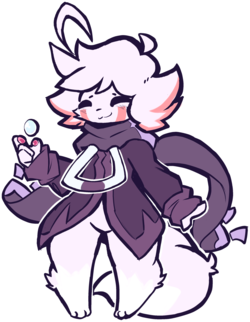 Yoku Crepes is a friendly traveling Acolyte of Café Lumistelle, hailing from the City of Boreal, a place of modernization, magic, and lingering night.

Yoku is one of the humans that went through antecedence representing the user YokuGrapeCrepe.

Yoku is a practitioner of morale and support, choosing to identify himself as a supportive warrior who fights among others, yet refuses to lay a paw on his enemies.

He’s fragile at heart, following close in the stead of older, wiser companions for his guidance in life. What noticeably stands out about him is his empathy and the willingness to side with everyone in order to bridge gaps between others. In doing so, he is known as the naïve type, sacrificing caution to establish blind trust in those who have yet to wrong him.

Yoku is child-like with a matured mind. He is unaware of his clumsiness and impulsive nature, often being caught unable to read the air of conversation while trying to assert his loveliness unto others.

His knowledge of others far exceeds what he knows about himself, often assessing the emotions of people around him and sharing in the good (or at times, lowered) spirits of his friends.

He is quite easy to influence and may at times force his good intentions when unwanted, being the unintentional bearer of trouble.

Yoku was brought up as a peaceful nomad, living life almost arm in arm with his older half. As one of the two faces of Café Lumistelle, he helped establish a place to bring the comfort of the night he experiences to the people around him.

Being someone who cherishes the night. His specialty in the manipulation of dark magic is what connects him to Lumistelle. While picking up all sorts of tricks to support and empower his friends, he has found himself unable to heal wounds in his school of magic without utilizing its nature to take life from others.

Knowing this, he cast away the ability to become a proficient healer in its entirety, instead learning arts that not only strengthen others, but bring out dormant pieces of themselves that go beyond the usual understanding of the dark element, infusing unnatural strengths in others to aid in their survival, and at times, destructive potential.

Yoku is an Acolyte who is a skilled support of all kinds without risking himself in a fight. He can support and sabotage at will with an array of combined sorcia based on bubbles and the banners of war.

More for self-defense, rather than as a weapon. Yoku wields a flag larger than himself, decorated a cloth of hearts and a spear-tipped end to thrust into the ground as a standing symbol of peace.

When supporting his friends, he may wave or spin his flag overhead to spread out an air of empowerment to others, not only boosting their natural abilities, but bringing out unique potentials below that lay dormant and unused.

Beyond his capabilities in supporting others, Yoku creates pockets of air to temporarily store unique ailments at a time. With enough time, he can create a combination of spells meant to weaken others, destroying them all at once with devastating effect. The size of the bubble he pops is proportionate to its effect and range. His casting can range from a minefield to a massive bubble far larger than himself, requiring the help of others to pop, but containing devastating strength within.

Listed are the ailments Yoku can cast while staying in touch with his nature to not harm others:

Basil Privanne is regarded as Yoku’s older half, his twin of different origins. The two are practically inseparable and work together at Lumistelle with Basil primarily keeping the place spick and span while Yoku focuses on customer appreciation.

While their synergy is strong, they never work on the same shift, as not to offset customers with their opposite traits. His personality easily counters Yoku’s cheery, childlike demeanor, acting as a tough, bitter friend that dilutes his overbearing love.

Otherwise referred to as “Moonie”, the 24-hour mechanical bartender of Lumistelle, he’s Yoku’s closest friend when Basil isn’t present for work shifts. Moon is always analyzing everyone’s own feelings and struggles, always there to offer the perfect coffee blend for the mood. He’s not the type to talk much, but such actions speak a great deal.

Vili Gante serves as the head manager of Lumistelle, and in a sense, the closest person to Yoku’s father, aside from his real father.

Vili is blunt, calculating, and apathetic, always buried in his tomes, but whenever he’s taken away from his studies, finds time to nurture the young goat.

Rin Damari is Yoku’s closest co-worker in terms of height, and not at all in friendship. Rin has a snarky, sassy way of going about his day that often upsets Yoku and makes him out to be the tail end of quite a bit of teasing. On the other hand, Rin is quite efficient at his own work as he is the only employee to carry out his job outside of Lumistelle by managing stocks and deliveries.

While not the best in terms of character, he means well and treats Yoku endearingly, often offering him refreshments on the job, much to the goat’s disbelief.

This page is approved as the current official version only if this page is placed found outside of the YokuGrapeCrepe namespace.
You can visit the up to date and modified original page at oc:YokuGrapeCrepe:yoku_crepes.