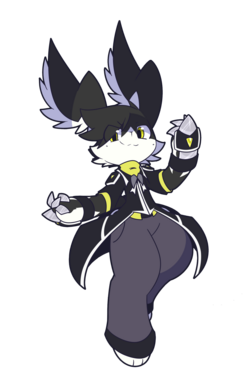 Shurian Shynga is one of the humans that went through antecedence representing the user Shurian.

Shurian is a bunny that likes to waste most of their time learning about stuff, about other people, from books, even new locations fascinate them! Even if that only lasts for a few minutes till they get interested in new stuff, what causes this is a rather fast ability to adapt to situations. By learning fast and having a lot of hobbies, if they gain any sort of interest in what one is doing, you can expect them to try to mimic it the next day.

Despite that rather carefree sounding attitude, they always have some sort of weird plan in their head, making goals rather easily and following them mostly through to the bitter end, including goals they already have since their childhood that they rather keep quiet about.

A rather “not too shy” introverted bunny, goes out of their way to talk to a lot of people but ends up drained from every single one of them. It somehow comes with an attitude of “not everything fun must be easy” for them, but they mainly like to meet new people for potential new challenges and satisfaction of curiosity. And hey if Shuri makes a new friend along the way, it’s a win/win situation for them!

Extremely honest, often rather blunt, especially to their friends, they can be thoughtful because of a “if it’s mean, just don’t say it” rule they learnt pretty early on in their life. They're kinda extreme in their actions and once setting their mind to something they go through with it. To at least try to stop them, someone needs to convince them that they're wrong what is not really that hard if they're actually wrong, but if they think it’s still fun despite it being, they'll just keep going, only really stopping if it had any dire consequences.

Despite their interest in other people and outgoing attitude, they do not trust other people! They have a strong attitude of honesty being above all else, which is what what causes their own bluntness and honesty, but alone that trait is what people are impressed by the bunny, making them think of how everyone besides themselves is a dirty liar.

Despite Shuri basically getting a second chance in life with their attendance, the first life already boils down to. “I wanted to learn everything there is” even if sadly there wasn't enough time for that.

After becoming a Typyl they immediately tried to figure out their new life instead of being in shock, because “why would anyone waste time in a cool dream?” Surprisingly though, this dream never ended.

Shuri decided to become an adventurer, wanting to find treasure, see many different things, gain new things, something just to kill the everyday boredom that they might feel if they're not learning something new. Even if it's just a weird personal detail of someone, Shuri would always continue the chase after any mystery that would lay itself in front of their eyes.

Shurian is really fast at learning and basically uses that to adapt to any situation, not as good as someone who’s done it for years, but they get the basics down real easily. Thanks to that you'll find them in the strangest places to learn new stuff, never really staying in one spot.

They're a rather fast thinker, making them quite adept with magic only hindered by a little bit of an electricity bias. They produce yellow electricity to compliment their general colour scheme, making others assume he can change his lightning to any colour he pleases.

In terms of combat Shurian likes to dominate their opponent with fast and strong attacks while trying to avoid getting hit at all cost, because of their small stature they can't really take that many hits, often jumping and running around on the battlefield as fast as lightning.

Their little sister they never really like to share personal details on. She means the world to them and they try to keep her a secret from mostly everyone.

An old fennec looking friend named Yuivee who basically always wears purple and black and carries around a sword that exceeds them in size. Their friendship started over a simple thought of “If I had a tank I don't need to only dodge anymore” and since then Shuri started to take quite the liking to the guy as they'd go on quite a bit of adventures together.

This page is approved as the current official version only if this page is placed found outside of the shurian namespace.
You can visit the up to date and modified original page at oc:shurian:shurian_shynga.