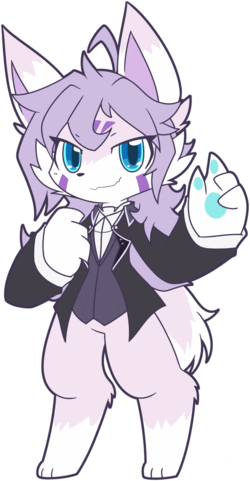 “Give me a reason to care, will yah?”
— Basil Privanne

Basil Privanne is a servant of an unknown master and yet freely roams around in Erthen, doing his best to serve for the satisfaction of his master.

Basil is a living oddity who thrives on existing for anyone but himself, having the tendency to second-guess how the world works. He prefers to be an outlier of society and is only interested in what he deems “brings about change”. He tends to display feminine mannerisms, but ultimately wishes to appear as others see fit.

He is not aligned to any specific group of people, and yet bearing augmentals giving him traits that of a machine. From this, he seems to boast having an enhanced vision and an immunity from pain, but such claims are unproven and the actual nature of the implementation of augmentals is a mystery.

Based on the relationships formed with Basil and the time spent around them, Basil acts differently depending on the person. This is split into two prime personalities:

Outside of this, he acts normally lax, but still tries to keep a formal posture at most times.

Blunt to a fault, he seeks to uproot trouble by acting preventative, thus refusing to opt for diplomacy when a situation can be quickly resolved with a strong arm. Glazed eyes and a slacking posture denote his nature.

Pourri believes in the ability to find change in seeking other interesting people, as opposed to creating changes on his own. With a willingness to adapt quickly to excellent levels of servitude and innate affection for others, he hopes to find something worthwhile from the endeavor.

Often, Pourri may leave the company of others for an unknown task he claims to be important.

While unwilling to tell who his master is, he's grown fond of the role and bases many of his values in protecting others from attacks.

Basil usually supports those who are in higher positions of authority, providing them with service when needed. He is also quite good with negotiation with settling terms and conditions in his favor.

As a servant, he also indulges in cooking but not at a high level but to enough to keep the party fed in adventures and everyday life.

Basil's affiliation with augmentals allows him to access to a personal set of arm-braced gauntlets designed after mechanical lifeforms. The braces themselves are easily carried by Basil despite its weight as it's linked to him not just by association but tied to his force reserve through exposures on his arms, temporarily acting as body parts.

When sufficiently heated, the braces project thrust vents to assist in greater punch velocity by jetting heat across the length of the arm.

The glow from his emissions indicate the level of energy passively collected and will be used on the next attack. The higher the glow, the stronger the next attack. However, this can be ignored with use with his own Override state, a stance that allows him to use excess force, which results him moving at incredible speeds in short bursts.

Basil has a possession of an “outrage drive”: a spinal generator that feeds into Basil's force reserve, supplying him with regular injections to supplement feelings of elation through emotion. If his mental state becomes extreme, however, the generator may overload and shut off, and his body will begin to slow to a halt, disallowing him to move.

Override acts as a form to heighten his senses, but is potentially lethal to Basil himself, as vital functions of his body may involuntarily shut down, suddenly entering downstate without precaution. However, his outrage drive may reboot and allow him to get back up only if he entered downstate through the shutdown. This will allow his system cool down and rest, resetting him to his last safe mental state once recovered.

When combined with combat discipline, Basil can incite his flow of force to generate excess heat along his arms, allowing him to produce explosive force only compared to heavy artillery.

As a warning to others, the hue of the outer rims of Basil's eyes will alternate to yellow to indicate when Override is active, signaling a level of instability.

Basil's only main relationship to other characters is only his master, who he remains in service to. Despite this, he is free to roam around to please his master, unless needed by his side.

Despite his clear role as a servant, he shall not and will not disclose any information about his master.

This page is approved as the current official version only if this page is placed found outside of the YokuGrapeCrepe namespace.
You can visit the up to date and modified original page at oc:yokugrapecrepe:basil_privanne.