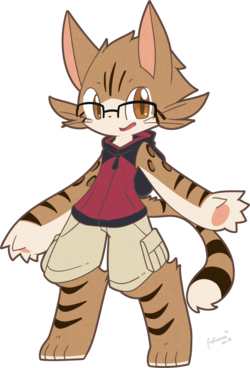 Nolsman is a written character for Furria. They are an engineer that works on repairs in the Airship Hub Tairga.

Nolsman is one of the humans that went through antecedence representing the user Sir_Vantez.

Nolsman is an engineer who works mostly for city repairs/maintenance. In battle, he utilizes his equipment to help support his teammates on the field. When not needed for work, he either helps teach in the Crafters’ Forgra Guild or he works on personal projects in his workshop.

Nolsman is easy-going and laid back most of the time. He keeps to himself for the most part but he’s more than willing to become friends with nearly everyone he meets. When working on crafts, he tends to over focus on his projects and may become unaware of his surroundings. In battle, he acts much more serious and focuses on keeping his friends alive.

Nols worked together with the Ferro Sav to create the Forgra and Collatus classes. He acts as a teacher for either class but is much more proficient with Collatus.

Nolsman has received formal training with firearms and heavy melee weapons, having dual revolvers as a weapon of choice. Outside of battle, Nols is found to be very proficient in building structures and mechanical works.

The revolvers he wields are loaded with sorcia-charged ammunition, which can be used both offensively and supportively. The ammunition he uses for support varies, from different aspect enhancement, support buffs and even regenerative healing.

When supporting an ally, he shoots a cartridge charged with an aspect of his choosing into the air. This causes the cartridge to explode, releasing the charged sorcia and letting the sorcia be absorbed by the ally, strengthening their own sorcia for a limited time.

To support multiple allies, he uses a canister instead and deploys them in a similar fashion as he would with his cartridges.

The sorcia contained in the cartridges are much more potent, only to be applied to a single typyl compared to canisters, which are significantly less potent but can be used with more than one Typyl who can use the matching aspect.

Luther Amarine is best friends with Nolsman. He's also romantically interested with him and vice-versa. Both of them hang out quite often.

He has quite a few set of friends. Basically, nearly everyone he comes across commonly.

This page is approved as the current official version only if this page is placed found outside of the Sir_Vantez namespace.
You can visit the up to date and modified original page at oc:sir_vantez:nolsman.