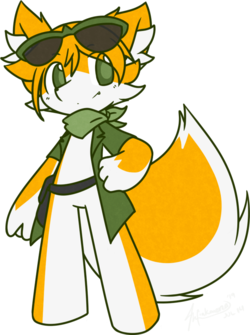 Chinoki “Chino” Nitid is a written character made for Furria.

Chinoki Nitid is one of the humans that went through antecedence representing the user chinoki346.

Chino is a farmer living on the outskirts of Port Town Patience.

As the old saying goes, “There's always room for improvement.” Taking this to heart, Chino tries his best to work, eat, and even sleep as quickly and effectively as possible. Anyone who does better is simply, for him, someone to copy. Anyone who does worse, he tends to shame overzealously. However, when it comes to self-confidence, he falls flat on his face. In his view, the smallest of mistakes do indeed signify the end of the world.

Chino’s battles are a gamble. He strives to make his first impression a one-hit knock out. If that plan fails, his next best choice is to run away.

Failing isn't always bad, is it? It's an inspiration to try harder. A reason to keep fighting. And for Chino, it turns up a smile, even in the face of death.

Chino was self-centered kid who thought he was righteous in everything he did. This attitude sparked a fight with his parents on the road. Losing total control over himself, Chino’s clamor resulted in a tragic car accident.

With the argument still playing through his head, he awoke alone inside of a crystal, with a TV and a bed. Outraged, believing to have done nothing wrong, he wished—or moreover, demanded—for a second chance right off the bat. How could he, of all people, have failed?

Frustrated, he wailed on the bed in tears and slowly drifted to sleep.

Rio Otun is his training partner and rival. They met one day in the training area, Astounded by his abilities as a newcomer, he competes with him to improve his own skills as much as possible.

As a duo, they are not a team to mess with. With Chino’s physical power and Rio’s magical support, they are to take down the toughest of their foes.

This page is approved as the current official version only if this page is placed found outside of the chinoki346 namespace.
You can visit the up to date and modified original page at oc:chinoki346:chinoki_nitid.