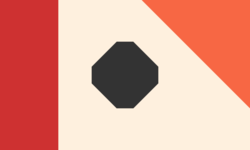 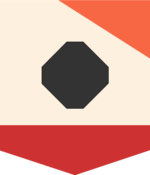 Postrecalf, primarily known as Post Mine Trecalf is plateau town at the foot of Postre Volcano.

It is the home of Sav Flamma :flamma: Aiden Farely. 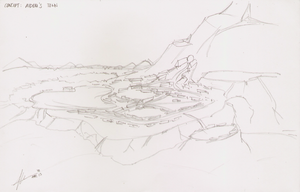 A draft concept sketch of Postrecalf

Postrecalf is a mining town settled on an island right beside a volcano surrounded by sea. It's feature of being a town both inside and outside a volcano is what makes it unique, with extravagant and creative ways of mining. People in this town actually find mining fun, along with the dangers of lava which makes it more interesting.

In this town, forging weapons are cheap as it can be easily made here upon having materials already in-hand.

The red represents the lava that was cast inside the caverns of Postre Volcano and the thriving community that dwells within. The brown represents the ground of the volcano and the towns surroundings with it's black center being the coal and metals contained within, which made the town work.

The orange on the top left are the Typyl standing on that ground, working towards a better goal: to lift each other up in time of need while the ever volcano looms of it's impending disaster.

Postrecalf is a town by a volcano mine, in which has an abundance of coal, glass and shining gems created from lava are made and are traded. Lava can be seen upon entering the mines.

The town is themed with a mix of a semi-western and a semi-italian town found near a large lake near a dormant volcano. The volcano itself is also a part of the town, with working buildings and infrastructure found within.