Reason: Pulled by the request of the author. (Starcana) 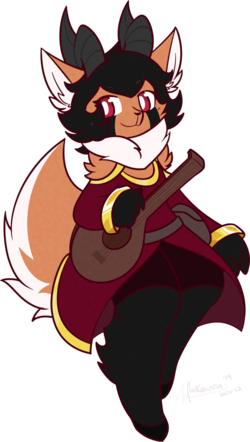 Morrigan Astrana was a written character in Furria. She was known all around Fiagia as a prominent figure in media, having a healing property resonating with her music.

Morrigan was one of the humans that went through antecedence representing the user Starcana. However, it ends up being much more complicated than the rest of the antecedents.

Morgan is a for-hire combat healer as well as a prominent figure in media across Furria. Known primarily as “Vitavox” for her manipulation of the aspects Vita and Vox to bring a healing property to all of her music, this of course allows for immense opportunities. She has gone on record many times stating “I would do anything to heal the ones i care about, even if i have to give everything i have to do it!” And this shows; on the battlefield she displays a near masochistic personality, purposely putting herself in harm's way to reach wounded and dying units, her voice never missing a note.

Aside from her role in combat, She also sings at local venues. The admission to her healing concerts is free of course, but she DOES take donations whenever they are offered for living expenses and the like.

Morrigan has a protective personality, and claims to only want the best for her friends and loved ones. She tends to worry about the safety of those she cares about, even when the issue isn’t as massive as she makes it out to be. This of course is the adverse for herself, she shows little care for her own well being when compared to how she treats others.

In her off time Morgan is a lot more relaxed, speaks a lot louder, and jokes around a lot. She doesn’t let this side of her reach many people, however, so as not to be considered obnoxiousto those she does business with.

She ADORES exploration and stays a for-hire solely so she can see the world from every possible angle. Because of this, its best not to let her out of your sight for too long, she might wander off the second a mission is completed.

Not much is known about her personal life and upbringing, The only person who seems to know where she came from is a woman by the name of Avery, who claims Morrigan was found wounded in a field lacking any clue who she was aside from a name. Many are skeptical of this, but Morrigan is truly clueless of her own origin, and dismisses any and all questions about it that come her way. Wherever she is from it must not be very important.

While her upbringing prior to her entrance into the world is a blank sheet. Her exploits are known quite well making it relatively easy to recognize her.