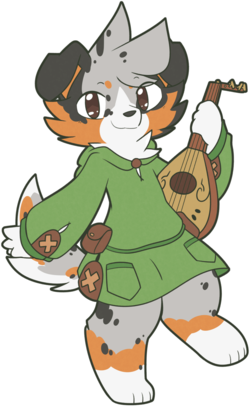 Millie is an unofficial character in Furria. Millie is a bard traveling the surface of Fiagia.

Millie is one of the humans that went through ​antecedence ​representing the user ​ManyDogs.

Millie is a bard and entertainer who travels the world of Furria with no particular goal in mind, aiming only to have fun and meet new people.

Millie is an exceptionally confident individual. She enjoys flirting with and teasing both friends and strangers and is known to occasionally take her teasing too far, especially with friends. Despite this, she cares deeply for her allies and frequently offers them emotional support, attempting to act as an older sister or motherly figure to younger individuals in particular.

Before becoming a bard Millie worked on a small farm, caring for an old woman and her grandchildren in place of their parents. She later entrusted the farm to the oldest of the children and set out as a traveling bard, seeking adventure and occasionally sending money home to her home.

Millie, being a bard, is skilled in a variety of instruments and is a talented singer as well. She is incredibly charismatic and can very easily convince others to bend to her will or deceive them.

In battle Millie takes on a support role, buffing her allies through use of sorcia and preferring to remain in the backlines. However, if need be she can take to the frontlines and engage enemies with her rapier.

This page is approved as the current official version only if this page is placed found outside of the ttropes namespace.
You can visit the up to date and modified original page at oc:ttropes:millie.