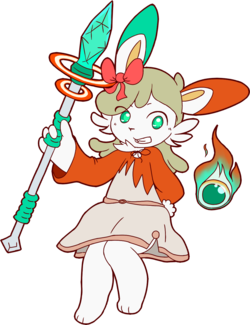 – often quite a pyromaniac, likes to burn stuff for fun as long as it doesn't harm anyone
– is very easily flustered and nervous, sometimes being tsundere like
– usually reluctant to accept compliments
– sometimes stubborn and unwilling to change in personality, habits, and decisions if not sufficiently convinced
– usually very caring, friendly, and empathetic to friends and quite often to people in general
– can be quite moody at times with spikes of depression, apathy, irritation, and so on
– can become unresponsive/quiet when not in a good mood
– doesn't like too much contact too often, and needs time to be alone, else will seek it actively by closing herself off
– loves music a lot and may start singing if comfortable enough
– does not like most fruits/vegetables, prefers salty, savoury, or spicy things over sweet things
– does not like hurting/going after people if unjustified, and will stand up for others if they are in danger
– is very honest, and does not like to lie unless necessary, but when she does, she's often very good at it
– prone to doing dumb and illogical things sometimes
– does not use any proper swear words unless alone
– likes to joke and fool around when she feels like it
– can be quite bold/fearless when genuinely invested or fired up about something serious
– the happiness and wellbeing of her friends and loved ones represents a large portion of her own happiness, causing great stress for her if others are unhappy

In battle, Xcyiterr tends to stay far away from the main action when possible, bombarding her foes from a safe distance, artillery style. This usually involves her being high up in the sky and or a suitable platform, out of reach of most conventional enemies; and with her staff and brand of red and mint green fire, she can quite easily deal out massive amounts of AoE :flamma: Flaim damage without needing to risk much of the dangers of combat. She also acts as a support healer for her allies if they need it, being able to cast basic recovery and debuff removal/buffing with :amplius: Ampli related sorcia.

Along with her staff, she also has a floating crystal casting orb following her, being occasionally used as an additional medium for casting her Sorcia, and as a “passive storage” for any fireballs she casts but wishes to use at a later time. Additionally, both the rings and crystal of her staff and her orb also double as a convenient source of light, though she can toggle either off should said light not be wanted. Besides that, she usually keeps both in her Arcitory when not in use.

Utilising all three of her main aspects, Flaim for the fire, :vello: Gravi to compress the flames, and Ampli to overclock the potency of the compression and raw energy, she can compress her flames into small but very hot and explosive fireballs of varying sizes. These fireballs are also usually homing, as with the same sorcia, she can direct her fireballs to travel along complex paths with ease, essentially causing them to be home in on the target.

Usually, she compresses a large amount of her flames into a singular fireball and launches it at a group of enemies. This in turn causing a massive explosion and setting the floor ablaze upon impact, with powerful enough ones being able to rip apart solid ground and toss the debris outwards as deadly shrapnel.

Though often at times, she can also split her power into many smaller fireballs instead, launching groups of them at foes like missiles homing in on their targets. This split can also happen when a projectile is in mid flight, resulting in sort of a cluster missile effect when done on a larger fireball. As well as this, her fireballs can also split upon detonation or impact as well, causing a fragmentation like effect with miniature fireballs and sparks flying in all directions.

As a fun side effect, with a bit of roundabout sorcia casting and odd technique, she can also repurpose her fireballs as fireworks, able to detonate them into various patterns and colours. These pseudo firework fireballs can also be used for their usual purpose of combat as well. Though not as effective at blasting enemies away as her normal fireballs, they can daze her foes with bright flashes of light when detonating, being quite the radiant spectacle to witness, whether used for combat or for actual fireworks.

Additionally, instead of using her fireballs immediately after casting, she can store them in an orbit around her casting orb, which can later be redirected at foes either automatically or at her discretion. The former of which essentially arming her casting orb as a sort of single use sentry, ready to strike nearby enemies down even without her active guidance, making it a very useful tool for her for passive defence.

Furthermore, not only is she able to store her fireballs around her casting orb, but she can instead set them in place and in the air, static, and ready to be blown up at her command as if they were remote mines. This can also be done with multiple fireballs at once, having an entire “net” of explosive fireball mines armed to go off all at once for potentially stunning levels of destruction. However though, these fireballs do come with a small but not inconsequential force cost to keep stable all at the same time, limiting her to only being able to upkeep around 20 mines at a given time.

Since she usually tends to stay at great distance from her foes, she doesn't have much in terms of defensive options against attacks directed straight at her, relying on the distance and the height she can achieve with flight to ease the process of dodging or avoiding the attacks entirely.

Though, if forced to fight at close range, she can instead channel her fires forward with her staff without compressing them first, basically resulting in a sorcia powered flamethrower. Even though this is more force efficient than using her usual fireballs, she usually prefers not to do so and instead opt to retreat back to a safe distance to not risk any further danger.

As well as this, she is also able to use Gravi sorcia to create gravitational pulse waves to blast foes away from her in a pinch if they get too close. Though, due to the amount of force required to send a pulse wave, this ends up being very draining on her if used too many times.

Not only that, but she can also utilise the same kind of sorcia to remotely intensify the natural gravitational force of a particular area, slowing down or grounding opponents entirely, reducing their threat to her and making them easier to hit with fireballs.

Besides these though, she lacks other viable options when engaged in close combat, as she needs to be at least partially focused in order to cast her usual fireball sorcia.