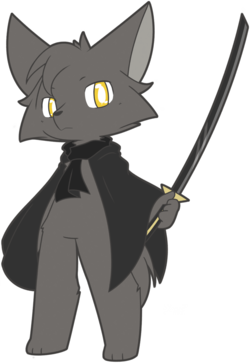 Lycus is a written character in Furria. Lycus is a wanderer on the surface of Fiagia surviving with no home and finds a purpose to live his life in the world.

Lycus is a representative of antecedence representing the user lycus.

Lycus is a wanderer who travels the world of Furria battling it out with corrupted monsters and typyl while in a state of longing to find some purpose to live his life and a reason to swing his blade.

Lycus generally fights aLycus wielding usually only a single blade of his, because of this he offers a variety of ways with his use of nox in order to compensate the lack of an entire party when combatting enemies or corrupted beings from large area of effect attacks to defensive barriers and status effects.

His most notable trait gained from this is the fact that when aLycus all his abilities, strengths and defense are greatly increased making him an extremely deadly person to engage against even by himself.